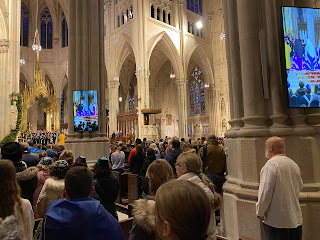 For 90 years Ukrainians around the world, in many countries and in many forms, have shed tears amid reciting prayers for the intention of souls of the 7-10 million innocent Ukrainian men, women and children who were starved to death by the murderous russian regime headed by the insane dictator Josef Stalin. They’re crime: they were Ukrainian.

The United States Senate, among other lawmaking bodies, in a resolution adopted on March 14, 2018, stated that it “… recognizes the findings of the Commission on the Ukraine Famine as submitted to Congress on April 22, 1988, including that ‘Joseph Stalin and those around him committed genocide against the Ukrainians in 1932–1933.′”

Other institutions from myriad countries have adopted similar statements that can be read here:  https://holodomormuseum.org.ua/en/recognition-of-holodomor-as-genocide-in-the-world/#:~:text=April%209%2C%202009.-,%E2%80%A6,the%20height%20of%20the%20famine.

Ukrainian Americans in New York City assembled today in St. Patrick’s Cathedral for the latest spiritual iteration of the remembrance, which has been held here for 35 years.

This year’s ceremony had special significance for the throng that filled the historic house of worship. Not only did they pray for the repose of the souls who died a horrible death deprived by russians of even a grain of wheat and stalk of grass but also to pay tribute to the heroic Ukrainian nation as it battles Moscow in its latest war against Ukrainians. Both mass murders are considered acts of genocide perpetrated by russia. This dual emotional commemoration of past and present russian crimes against the Ukrainian nation probably contributed to the overflowing attendance at the program organized by the Ukrainian Congress Committee of America.

Clergy and hierarchs of the Ukrainian Greek Catholic Church and the Ukrainian Orthodox Church in the USA concelebrated the ecumenical moleben and requiem with responses sung by the Ukrainian “Dumka” chorus of New York City lead by Vasyl Hrechynsky.

Archbishop-Metropolitan Antony of the Ukrainian Orthodox Church reflected on the ironic lack of modern Internet technology that obviously wasn’t available in 1932-33 to inform the world of this crime of mass starvation that led to Walter Duranty’s abysmal lies in The New York Times. However, today with the ubiquitous Internet and social media the global population knows firsthand about russia’s war crimes in Ukraine. The memories of both moral wrongdoings will live on from generation to generation in God’s heavenly Kingdom, the Ukrainian hierarch observed.

Ukrainians rose through Russian aggression after aggression like the mythological phoenix and today the world sees Ukrainians as a free and independent nation with the right to live free, according to its own laws and traditions, he continued. True words about Ukraine and russian aggression spread throughout the world outweighing the naysayers.

“Our protests have awakened the world about Ukraine and it is listening,” Metropolitan Antony said.

While the sanctified number of 7-10 million victims-martyrs of Russian-made starvation is recorded in history, the hierarch pointed that those deaths also contributed to loss of millions more Ukrainians who could not have been born.

Michael Sawkiw Jr., director of the UCCA’s Ukrainian National Information Service in Washington, DC, called russia’s politically motivated vile tragedy an act of genocide that matches the United Nations’ definition of such a mass liquidation of one people, one nation. He said russia’s desire to control Ukraine resurfaced again eight years ago when it invaded and seized Crimea and the Luhansk and Donetsk oblasts and now, nine months again with the latest invasion of Ukraine.

In addition to missiles that russia’s aims against innocent Ukrainian civilians and life-sustaining utilities, Moscow is also counting on the winter cold to force Ukrainians to freeze to death or surrender, he noted.

Holodomor or death by hunger as it called in Ukrainian has become a globally recognized word, Sawkiw said. “Then it was Holodomor, then it was genocide, while now it’s justice, when?”

Ambassador Sergiy Kyslytsya, permanent representative of Ukraine to the United Nations, said the Holodomor is among the tragic pages of the history of Ukraine. He alluded to the repetitive nature of russian aggression against Ukraine for the purpose of subjugating the nation and destroying the country. Sophisticated weapons are in the forefront of russia’s invasion but today it is reverting to starvation and famine in order to subjugate not only Ukraine but countries in Africa and elsewhere. He said 828 million people are facing hunger today because of russia’s invasion of Ukraine and the consequential blockades of Ukrainian seaports and hijacking of cargo. Nonetheless, Kyslytsya called on the attendees not to despair because 143 UN member-states support Ukraine. “Don’t let the enemy see us despair,” he urged the participants.

Dying of hunger is not an easy death, not as easy as being executed by gunfire, which the russians also effectively carried out. Dying of hunger is painful and long. The organs and body deteriorate and then man, woman or child cease to exist. That’s what russia did to 7-10 million Ukrainian men, women and children.

With thoughts of “never again” on the lips of the throng, history has sadly shown that russia regularly repeats its bloody attempt to subjugate Ukraine. Ukrainians have not been fortunate to face Russian brutality once and never again. What happened in 1932-33 happened before and is happening again today in front of the world which for the sake of humanity must be brave to say “Never forget; Never forgive.”