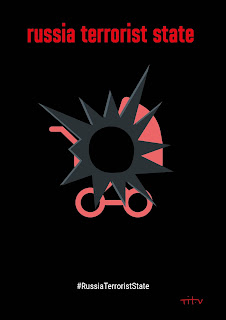 Was it difficult in May 1945 to convince the world that Nazi Germany was a terrorist state, the perpetrator of murder on a mass scale, of genocide? Was it difficult then to denounce its leaders, Adolf Hitler and the other Nazi officials, supporters and common Germans as war criminals?

You would think that the past nearly six months have persuaded the global community that Russia has been perpetrating the most heinous crimes against the Ukrainian nation, crimes condemned by all civilized nations that set it apart on a bloodier level than Nazi Germany?

The world has been witnessing Russia’s unrelenting war in Ukraine since February 24 that was to end in a couple of days. It hasn’t been a war between opposing armies because Russia soon came to its painful realization that its army can’t match the Ukrainian army and its soldiers can’t be regarded as combatants. They’re cutthroat killers. The world beheld Russian invaders’ total disregard for human life, the lives of innocent women, men and children. The shocking atrocities uncovered in Bucha and Irpin, the annihilation of the port city of Mariupol, the seizure of prisoners of war and later their execution, and the latest manifestation of Russian butchery with missile attacks on civilian targets in Kremenchuk and Vinnytsia can only be described as genocide perpetrated by Russian terror– the pre-meditated intent to kill all Ukrainians, to eradicate them from human memory along with their houses of worship, museums, historical landmarks, and language.

Moscow’s war of aggression against Ukraine continues to cause carnage and untold suffering among the people. By all accounts, Russia and Russians can only be equated with terrorists and terrorism.

Last month, a bipartisan duo of senators called on the Biden Administration to designate Russia as a state sponsor of terrorism in response to its invasion of Ukraine, saying they would push Congress to pass a bill issuing the designation “whether or not” it had President Joe Biden’s support.

Democratic Sen. Richard Blumenthal and Republican Sen. Lindsey Graham said the designation should be made either by the President or Congress, with both of them saying Biden must intensify pressure on Russian President Putin and continue aiding Ukraine amid the ongoing invasion.

“I hope the President will decide to adopt this stance voluntarily and he hasn’t taken it off the table on the state-sponsored terrorism,” said Blumenthal of Connecticut.

Graham of South Carolina said he wants the Biden administration to engage with Congress in designating Russia as a state sponsor of terrorism but said Congress is “willing” to advance legislation calling for the designation regardless.

• Chairperson-in-Office of the Organization for Security and Co-operation in Europe Zbigniew Rau stated that actions of the government of the Russian Federation in Ukraine against innocent civilians and civilian infrastructure is “state terrorism”;

• President Volodymyr Zelenskyy of Ukraine called for the world to acknowledge the Russian Federation as a terrorist state;

• The Verkhovna Rada of Ukraine (parliament) has appealed to Congress to encourage the Department of State to recognize the Russian Federation as a state sponsor of terrorism noting that “the Russian Federation has for years supported and financed terrorist regimes and terrorist organizations, including being the main supplier of weapons to the Assad regime in Syria and supporting terrorists in the Middle East and Latin America, organizing acts of international terrorism, including the poisoning of the Skripal family in the United Kingdom of Great Britain and Northern Ireland, the downing of a civilian Malaysian airliner and other acts of terrorism”;

A House version designating the actions in Ukraine as acts of genocide was introduced by Reps. Steve Cohen (D-TN) and Joe Wilson (R-SC). Russia’s war of aggression against Ukraine continues to cause carnage and untold suffering. In nearly six month of war, the Kremlin aggressors have killed thousands of innocent civilians and injured thousands more.  H.Res.1205, recognizes Russian actions in Ukraine as a genocide, explicitly condemns the genocide of Ukrainians and “supports tribunals and international criminal investigations to hold Russian political leaders and military personnel to account for a war of aggression, war crimes, crimes against humanity, and genocide.”

So what doesn’t the world understand? The Senate and House of Representatives support it. So does House Speaker Nancy Pelosi, along with Ukraine’s president, Volodymyr Zelenskyy, the Ukrainian Parliament, and the former captive nations of Russian subjugation.

But Secretary of State Antony J. Blinken is not so sure.

As pressure has mounted on Blinken to formally declare Russia a state sponsor of terrorism, a label currently reserved for North Korea, Syria, Cuba and Iran, he is resisting a move that could force him to sanction U.S. allies that do business with Russia and might snuff out the remaining vestiges of diplomacy between Washington and Moscow. And the Secretary State knows about Russia’s crimes, he has condemned them and strongly supports Ukraine in its war of survival against Russia.

According to the State Department, finding that Russia is a state sponsor of terror — a label that agency officials refer to as the “nuclear option” — would result in more sanctions on Russia’s battered economy, including penalties on countries that do business with Moscow. It would also waive traditional legal barriers that prevent private citizens from suing foreign governments for damages, potentially including the families of American volunteers killed or injured while fighting Russia in Ukraine.

The pain and suffering of Ukrainians, of the parents of children raped and killed in their presence, deserves greater attention and sympathy.

Also, Putin has publicly opposed the designation of state sponsor of terrorism and threated retribution against America if it goes through with congressional resolutions.

Overseas, Latvia’s parliament declared Russia a state sponsor of terror. Latvia’s unicameral parliament, known as the Saeima, approved a resolution noting that Russia has supported and financed terrorist regimes and organizations for years. The Saeima used as examples Moscow’s support for the Assad government in Syria shooting down Malaysia Airlines Flight 17 over eastern Ukraine in 2014 and the poisoning of British intelligence agent Sergei Skripal and his daughter in 2018.

The Latvian statement said Russia has now used “similarly ruthless, immoral, and illegal tactics in Ukraine, as it uses imprecise and internationally banned weapons and ammunition” on civilians. It also cites reports from human rights groups and international observers, which have documented atrocities committed by Russian forces against Ukrainian civilians, “including torture, rape, killings, and mass detentions of civilians.”

Latvian lawmakers said Russia uses “suffering and intimidation as tools in its attempts to demoralize the Ukrainian people.” They recognize these acts against civilians “committed in pursuit of political aims as terrorism and Russia as a state sponsor of terrorism and calls on other like-minded countries to express the same view.”

They also called on the European Union and the West to “urgently intensify and implement comprehensive sanctions against Russia, as well as call on European Union member states to immediately suspend the issuance of tourist visas and restrict the issuance of entry visas to citizens of the Russian Federation and Belarus, among other measures.”

Enough debating. A war such as the Russo-Ukraine War of 2014-22 hasn’t been seen in Europe in decades if not longer. If you’re still hedging, recall the image of little Liza, the autistic girl who was killed in a Russian missile attack on Vinnytsia while pushing her stroller next to her mother.

Russia and Russians must be declared sponsors of state terrorism for all ages.