In aftermath of Russia’s Bombing…

In aftermath of Russia’s Bombing of Civilians, Zelenskyy Asks UN: ‘Why?’ 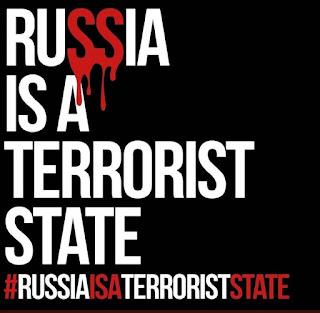 Russia has continued its murder of Ukrainian men, women and children for more than four months. Some have explained this deadly, criminal onslaught as Moscow’s retribution for the free world’s support for Ukraine, for the G7 and NATO’s commitment to help Ukraine fight Russian invaders as long as it takes.

While some news media focus on covering Russia’s war in Ukraine by citing Moscow officials and Ukraine’s losses, others do report on Ukrainian victories, destruction of Russian tanks and artillery, and elimination of Russian invaders.

However, none can overlook the massive killing of innocent civilians, going about their daily chores in the midst of Russia’s invasion.

Ukraine’s President Volodymyr Zelenskyy again brought Ukraine’s case against Russia to the United Nations on June 28 by asking why Russia is still allowed to take a seat in the hallowed halls of the Security Council and General Assembly while its hands are covered with Ukrainian blood and its mouths are filled with ludicrous denials of its complicity.

Indeed. How can the free world and a few neutral countries share the same space with a cold-blooded murder and rapist and not feel any qualms, anger or hatred?

Zelenskyy reproached the UN member-states for tolerating the presence of Russia in the world body. He said the representative of “a terrorist state, Russia (purposefully written in the lower case) “and this flag do not deserve to be among you, as there are no representatives of other terrorists among you.”

The Ukrainian delegation has on numerous occasions raised the point that terrorist Russia should not be a member of the United Nations and that, formally, Russia was never accepted as a member-state.

While noting that there is no UN legal definition of “terrorist state” accepted by all members, Zelenskyy accused Russia of behaving in such a manner. “But this war that Russia is waging against Ukraine demonstrates not only the meaning of this notion, but also the urgent need to enshrine it legally – at the United Nations level – and to punish any terrorist state,” he said.

The Ukrainian president cited the following recent examples of bloodshed against Ukrainian civilians:

• Take a look at the events of just a few days in Ukraine – a few of the 125 days of Russia’s full-scale war of aggression against our state. On Saturday, June 25, 62 Russian missiles hit our cities. On Sunday, June 26, 10 more missiles. In particular, one of them – on a residential complex in the capital of our state, in Kyiv. Three floors of the house were destroyed. Another rocket exploded in the yard of an ordinary kindergarten.

• On Monday – June 27 – a missile strike on Kremenchuk. The person who gave the order could not have been unaware that he was directing the rocket to the regular shopping center – one of many shopping malls that exist in any country in the world. The list of dead 18 people – as of this hour, there may be, unfortunately, more; more than 50 people were injured, dozens more – on the list of missing persons.

• Yesterday, the Russian army also struck civilians standing in line for water with rocket artillery. It was in the city of Lysychansk, Luhansk region. Ordinary people. None of them were military. Just a line, waiting for water! Eight people were killed, including a 15-year-old boy named Danilo. The oldest among the dead was 68 years old. And I want you to hear now the names of four women killed by this blow: Victoria, Irina, Elena and Lyudmila.

• Today at 5 A.M. Russian army struck Mykolayiv and the city of Ochakiv, Mykolayiv region. In Ochakiv three people were killed. A 6-year-old girl named Eva. A man named Magomet was 76 years old. And a woman named Galyna, 50 years old. Among the wounded –a child, a boy, he is only 3 months old, he was born after the beginning of this full-scale Russian invasion, his name is Volodymyr, and his condition is very heavy – he is in intensive care. Once again: a child, a 3-month-old child.

• Two more missiles hit the city of Slavyansk in the Donbas, in the long-suffering Donbas, which Russia has been mocking since 2014. 2 Russian missiles struck the Odesa region just a few hours before my address to you, to the UN Security Council. There has been a strike at Dnipro, a city in central Ukraine. One of the missiles destroyed a car maintenance station – not a military station, but a regular car service …

Zelenskyy asked: “And I have a question for you, ladies and gentlemen: ‘Who does NOT agree that this is terrorism?’ If in any part of the world any organization, just as Russia kills Ukrainians, would kill any peaceful civilians, it would definitely be recognized as terrorism. Such an organization would become an enemy to all humankind. Therefore, what is punished at the level of concrete criminals and criminal organizations should not go unpunished for a state that has become a terrorist.”

The Ukrainian commander in chief, who has inspired not only his nation to fight for their country but also the international community to support Ukraine’s righteous battle, told the diplomatic audience that the members of the UN Security Council, according to the UN Charter have “the primary responsibility for maintaining international peace and security.”

However, Russia has miserably failed in this mandate.

“Although Russia violates the fundamental principles of the United Nations and the international legal order, it has not yet been held accountable at the global level. This country still remains present in the UN bodies and even enjoys the privileges of the seat it holds – the seat of a permanent member of the UN Security Council, which Russia holds only because of the short-sightedness of Cold War-era politicians,” Zelenskyy said.

The UN must do everything in its power to stop Russia from murdering Ukrainians, Zelenskyy urged.

“Russia must be brought to justice for terrorism, otherwise it can expand terrorist activity to other European and Asian countries – the Baltic States, Poland, Moldova, Kazakhstan – many nations have heard threats from Russian officials and state-affiliated propagandists,” he continued.

The UN already has a “toolbox” with which it can deal with terrorists like Russia, so it must take advantage of it, Zelenskyy said.

“It is necessary to deprive the Russian delegation of the opportunity to manipulate the UN. It is necessary to make it impossible for Russia to stay in the Security Council as long as its terror continues. It is mandatory to create a Tribunal to investigate everything that the Russian military has done against Ukrainians. And it is necessary to give a legal definition of the term ‘state terrorism’ at the UN level. All of Russia’s actions must receive a legal assessment – and global sanctions for disrupting the international legal order,” he concluded.

How can the United Nations claim to support global peace, security and development when its member-states collectively and some individually shun their responsibility to fulfill that mandate? Expel Russia from all UN bodies and agencies.