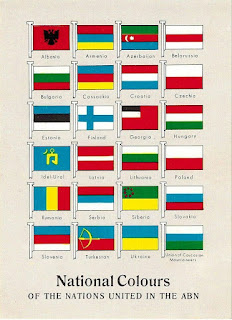 Russia has again lived up to its aggressive, murderous reputation – as we have contended all along – and consequently Captive Nations Week 2022 will be most meaningful of all.

Adopted in 1959 during the Cold War, the historic proclamation that recognizes the plight of captive nations of Russian subju
gation has been regarded by some as a relic of bygone days and political beliefs. Others even argued that it should be shelved and forgotten.

Interestingly, though, words in the original document and the annual observations have been thorns in Russians’ eyes as its leaders would periodically insist that Washington should abandon it.

Eight years of fighting in eastern Ukraine haven’t been enough to raise the free world’s awareness about Russia’s global threat and the necessity of this annual commemoration. Then on February 24, 2022, Russia launched a no-holds-barred invasion of Ukraine with the goal of not only re-subjugating it but annihilating the country, nation and memory of their existence. This unprovoked invasion of Ukraine by Russia was not unexpected. Since the end of World War Two the west has been apprised of such an eventuality and the original Captive Nations Proclamation implied it. Leaders of the captive nations’ liberation movements warned the free world that Moscow will turn its guns against them. 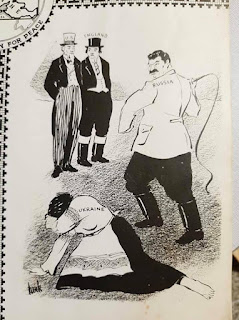 Ukraine’s Ambassador to the United States Oksana Markarova, replying to George Stephanopoulos of ABC’s This Week, said Ukrainians weren’t surprised by Russia’s invasion. They’ve been anticipating it for 400 years.

The Associated Press reported this week that the Central Intelligence Agency admitted it underestimated President Zelenskyy’s true grit and Ukraine. As its analysts were pondering whether Zelenskyy would be a Churchill or will he run, they concluded that the President of Ukraine wouldn’t stay the course.

“Ultimately, U.S. intelligence agencies underestimated Zelenskyy and Ukraine while overestimating Russia and its president, even as they accurately predicted Vladimir Putin would order an invasion,” the newswire said.

These costly mistakes against Ukraine cannot be repeated. Consequently, the Captive Nations Week Proclamation of 2022 from the White House to American City Halls will be the most meaningful because it could serve as a reminder of the peril posed by Russia. Collectively they will tell future generations what Americans did when Russia invaded Ukraine, and killed and raped Ukrainians, and destroyed the country and historic landmarks. Did they support Ukraine and its total victory over Russia or did it waffle and plead that Ukraine and its supporters shouldn’t humiliate Russia and its fuhrer Putin?

Despite the lack of serious attention to so-called remnants of the Cold War, the annual Captive Nations Week Proclamations based on Public Law 86-90 are important reminders of the ongoing danger posed not only by old and new totalitarian communist regimes and notably their creator Moscow in all of its political colorations up to including today’s Putin-led federation. Russian leaders opposed this proclamation and overtly or quietly had asked successive Administrations to abandon it. None did, though President Richard Nixon, in the midst of his peaceful coexistence policy, delayed issuing the 1971 proclamation that ultimately was devoid of the words Communist, Soviet and Russia.

The third week of July has been traditionally filled with similar proclamations issued by governors and mayors as well as civic commemorations in large and small communities.

For a historical perspective about the Captive Nations Week Proclamation, I’d like to quote from an article by Lee Edwards, chairman and co-founder of the Victims of Communism Foundation, that appeared in the Summer 2020 edition of The Ukrainian Quarterly:

“One man more than any other was responsible for the proclamation and the week – Prof. Lev E. Dobriansky of Georgetown University, longtime president of the Ukrainian Congress Committee of America. Born in November 1918 in New York City of Ukrainian immigrant parents, Dr. Dobriansky attended New York University where he earned a Ph.D. in economics. He taught at Georgetown from 1948 until 1987 during which he founded and directed the Institute on Comparative Economic and Political Systems. He also served as U.S. ambassador to the Bahamas from 1982-86 when the islands were in the front lines in the battle against illegal drug traffic.

“Professor Dobriansky came into political prominence in 1959 when he persuaded Congress and the Eisenhower administration to adopt the Captive Nations Proclamation, which he personally drafted. The Proclamation was a litany of anti-Soviet pro-freedom paragraphs:

“ ‘Whereas since 1918 the imperialistic and aggressive policies of Russian communism have resulted in the creation of a vast empire which poses a dire threat to the security of the United States and of all the free peoples of the world;

“ ‘Whereas these submerged nations look to the United States as the citadel of human freedom, for leadership in bringing about their liberation and freedom and in restoring to them the enjoyment of their Christian, Jewish, Moslem, Buddhist or other religious freedoms and of their individual liberties…

Whereas the desire for liberty and independence by the overwhelming majority of the people of these submerged nations is a powerful deterrent to war and one of the best hopes for a just and lasting peace;

The late Prof. Lev Dobriansky wrote about the proclamation’s significance in his article, “The Captive Nations Week Resolution Then and Now”:

“Originated as S.J. Resolution 111, passed on July 17, 1959, and signed into Public Law 86-90, the law has remained in force to the present day precisely because of its realistic, conceptual framework and outlook. With ease and real conformation, its dominant concepts relate to these upsurging events. They are: ‘national independence,’ ‘the democratic process,’ ‘inter-dependency of peoples and nations,’ ‘imperialistic and aggressive policies of Russian communism,’ ‘a vast empire,’ ‘threat to the security of the United States and of all the free peoples of the world,’ ‘religious freedoms,’ ‘individual liberties,’ ‘powerful deterrent to war and one of the best hopes for a just and lasting peace.’ Then and now – even more so now and in the future – these concepts have been fully applicable, notwithstanding current hopes and notions about the end of the Cold War, the fading of military threat from the Soviet Russian empire, and secure, sovereign national freedom in Central Europe.”

For its invasion and mass murder of Ukrainians, its war crimes and acts of genocide, Russia deserves the commendation of all peoples of the world, which would serve as an assurance that Moscow won’t repeat bestial crime anywhere.

Undeniably, the Captive Nations Week Proclamation belongs to the category of American documents that should be observed throughout the ages. It should not be watered down by other issues like President Biden did last year. It should serve as a strong denunciation of Russia’s past, present and future aggressions against any freedom-loving country in the world. It should condemn Russia’s merciless invasion and mass murder in Ukraine. It should declare America’s comprehensive military support for Ukraine and urge its allies to do the same. It should unreservedly endorse Ukraine’s sacred mission of defeating Russia.

The Captive Nations Week Proclamation of 2022 will be more meaningful than all of the others.