Mama, Why … Why Me, PleadLittle… 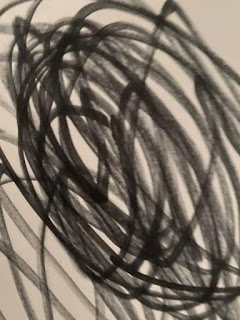 I am updating this blog of April 18, 2022, from a little boy’s point of view. Before you read it, take note of the illustration. Its lines scribbled, scrawled, stretching every which way, indecipherable. Drawn by someone who is reliving a horrific experience.

Perhaps illegible to the reader but not to the little boy in war-torn Ukraine. Don’t turn away from this blog. Don’t cringe. That won’t make the horror the little boy faced go away.

I found his story on Twitter. It was posted by Lesia Vasylenko. She wrote: “This is how an 11-year-old boy sees the world after having been raped by Russia soldier in front of his mother. I find it hard to read reports like this, even harder to tweet about them, and absolutely impossible to remain silent. The world must know the truth.”

For this to stop, the pain and disgust that hopefully you are feeling will strangle you to the point of at least writing to someone, your newspaper or elected official, demanding that the United States do everything in its power to help Ukraine end this war, punish Russia and bring a modicum of peace to the countless little boys and girls who were sodomized by Russian soldiers and their mothers.

The fear of their daughters being raped by Russian soldiers is so real, so pervasive that mothers in Ukraine are cutting their little girls’ braids, pigtails and ponytails so they look like little boys, hoping to save them from being raped by Russian invaders. I won’t conclude the thought that are probably thinking.

It hurts. It sounds ridiculous to say that. It hurts me, the reader, the writer. But imagine how much it hurts the little girl who has no idea of what and why the Russian soldiers did to her. It hurts the unfortunate little ones who survived the rape and weren’t killed only to be raped again. Perhaps the luckier ones were killed and discarded with or without their mothers in a common grave.

It hurts us, who are far away from this brutality, because many refused to believe that Russia will invade Ukraine. The hurt returned after the invasion when we saw the images of the invaders’ cruelty committed against Ukrainian civilians but especially their littlest daughters.

How can one human being commit such crimes against another human being, against a defenseless child?

No one has a logical, comforting answer but the violence did happen and the girl who survived turned to her mother and asked “Mama, why? Why me? What did I do?”

Stories of Russian savagery exist in every town that Russian soldiers occupied and not only in the accounts of eye witnesses. Many Russian invaders created selfies of themselves and their comrades raping and sodomizing Ukrainian children. The stories hurt.

I found these stories on a Ukrainian-language website called “To be a Mother” – https://tobemom.site/?fbclid=IwAR2XRb8eykw73XKaJOpQIcPIDRC2Tyv_e1Lq9dhzj5YBZhaBbihLQ_uolio

These few accounts are not for the weak of heart.

• Mom, why did those “uncles” punish me? Didn’t I behave well?” – this question was asked by 6-year-old girl, who was raped by two Russian soldiers in front of her mother in Irpin.

• A 9-year-old girl was raped by 11 (at least 11 sperm samples were found) soldiers, then they cut the letter “Z” on her chest and ripped her stomach open. Her parents were killed in front of her.

• Mother, father, 3 daughters 5, 8, 17 years old. Russians occupied in their home. The father was shot dead the same day. They raped the children in front of the mother, she was raped too. Girls aged 5 and 8 died from rape and injuries. The 17-year-old daughter and mother survived, but they are in critical condition in a hospital.

• Mother, father, 11-year-old daughter and their dog. The father was shot. The dog was cut apart for 4 hours in front of the child and mother. During the first week, the mother was raped in front of her child.

• Mother, father, 9-year-old daughter and 5-year-old son. Kadyrovites entered their private house. The father’s hands were tied, he was brought to his knees and shot in front of his wife and children. The next day, the boy’s genitals were cut off, he bled to death. The mother and daughter were raped for two weeks.

• Mother, father, grandparents and 2-year-old girl. All were found dead in their home. Father with their hands tied and shot. The child suffered a cut throat, the mother with torn genitals and slaughtered.

• 11 year-old boy was raped in front of his mother. She was tied to a chair to watch.

Yes, it hurts.The accounts are unimaginable, grotesque, almost fantastic, imaginary, incredible. How can this happen in the 21st century, in Europe? How can this continue happening without global cries of outrage?

Yes, it hurts. And the Russians will continue creating hurt until the hurt forces the free world to get involved and stop the Russians from raping and killing children.