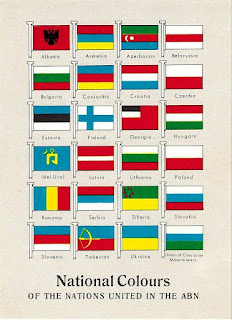 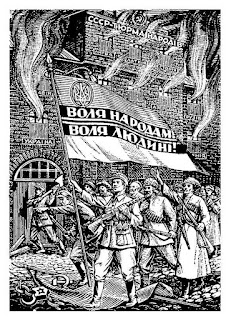 A World War II-era Ukrainian poster depicting the Soviet prison of nations and the motto: Freedom for Nations! Freedom for the Person.

In the midst of a changing world with new sources of regional and global threats, uneven condemnations of aggressors like Russia as it pursues its seven-year war against Ukraine, and rumors that the White House was considering revising the six-decade-old Captive Nations Week Proclamation, President Biden fortunately today issued the declaration that included references to Ukraine, Crimea and Belarus.

Despite the lack of serious attention to so-called remnants of the Cold War, the annual Captive Nations Week Proclamations based on Public Law 86-90 are important reminders of the ongoing danger posed by old and new totalitarian communist regimes and notably their creator Moscow in all of its political colorations. Russian leaders opposed this proclamation and overtly or quietly had asked successive Administrations to abandon them. None did, though President Richard Nixon, in the midst of his peaceful coexistence policy, delayed issuing the 1971 proclamation that ultimately was devoid of the words Communist, Soviet and Russia.

The third week of July was traditionally filled with similar proclamations issued by governors and mayors as well as civic commemorations in large and small communities.

President Biden did issue the statement but it was unwise of him to even consider downplaying its historic title with “Free and Open Societies Week.” The original version was meant to highlight the subjugation of countries behind the iron curtain by Moscow, such as Ukraine, the Baltic States, Poland, etc. In time the term iron curtain was expanded with the bamboo curtain, pertaining to Chinese oppression in Asia, and the sugar curtain relating to Cuban tyranny in the Southern Hemisphere, respectively.

Even though many captive nations, like those in Eastern Europe, have liberated themselves, they still face daily perils from Moscow. Russia’s war against Ukraine is seven years old as it simultaneously bullies and intimidates other near and distant countries – even the United States.

President Biden observed in the 2021 iteration: “Though much has changed in the world since President Eisenhower issued the first Captive Nations Proclamation in 1959, its call for liberty and opportunity still ring true.  During Captive Nations Week, we recommit ourselves to those principles which form the foundation of our Nation, and to amplify the voices of courageous individuals around the world who are striving to advance the principles of human rights, justice, and the rule of law.”

Biden took notice of existing oppression in Belarus, China, Burma, Cuba, Nicaragua and Venezuela, where “voices are crying out for liberty.” He also noted “the Crimean Tatars, ethnic Ukrainians, and other ethnic and religious minorities who suffer repression for opposing Russia’s illegal occupation of Crimea.”

“We are committed to ensuring that all those who are oppressed across the globe — including people with disabilities, women and girls, members of the LGBTQI+ community, indigenous populations, and racial and ethnic minorities — are heard, respected, and protected.

“During Captive Nations Week, we recommit ourselves to the timeless, vital work of advancing freedom and justice for all,” the President wrote.

“Together with our allies and partners, we must continue to strengthen democratic institutions, defend independent civil society and media freedom, promote free and fair elections, protect human rights online, insist on accountability for those who commit abuses and foster cultures of corruption, and push back against authoritarianism around the world.”

For a historical perspective about the Captive Nations Week Proclamation, I’d like to quote from an article by Lee Edwards, chairman and co-founder of the Victims of Communism Foundation, that appeared in the Summer 2020 edition of The Ukrainian Quarterly:

“One man more than any other was responsible for the proclamation and the week – Prof. Lev E. Dobriansky of Georgetown University, longtime president of the Ukrainian Congress Committee of America. Born in November 1918 in New York City of Ukrainian immigrant parents, Dr. Dobriansky attended New York University where he earned a Ph.D. in economics. He taught at Georgetown from 1948 until 1987 during which he founded and directed the Institute on Comparative Economic and Political Systems. He also served as U.S. ambassador to the Bahamas from 1982-86 when the islands were in the front lines in the battle against illegal drug traffic.

“Professor Dobriansky came into political prominence in 1959 when he persuaded Congress and the Eisenhower administration to adopt the Captive Nations Proclamation, which he personally drafted. The Proclamation was a litany of anti-Soviet pro-freedom paragraphs:

“ ‘Whereas since 1918 the imperialistic and aggressive policies of Russian communism have resulted in the creation of a vast empire which poses a dire threat to the security of the United States and of all the free peoples of the world;

“ ‘Whereas these submerged nations look to the United States as the citadel of human freedom, for leadership in bringing about their liberation and freedom and in restoring to them the enjoyment of their Christian, Jewish, Moslem, Buddhist or other religious freedoms and of their individual liberties…

Whereas the desire for liberty and independence by the overwhelming majority of the people of these submerged nations is a powerful deterrent to war and one of the best hopes for a just and lasting peace;

Ambassador Dobriansky wrote about the proclamation’s significance in his article, “The Captive Nations Week Resolution Then and Now”:

“Originated as S.J. Resolution 111, passed on July 17, 1959, and signed into Public Law 86-90, the law has remained in force to the present day precisely because of its realistic, conceptual framework and outlook. With ease and real conformation, its dominant concepts relate to these upsurging events. They are: ‘national independence,’ ‘the democratic process,’ ‘inter-dependency of peoples and nations,’ ‘imperialistic and aggressive policies of Russian communism,’ ‘a vast empire,’ ‘threat to the security of the United States and of all the free peoples of the world,’ ‘religious freedoms,’ ‘individual liberties,’ ‘powerful deterrent to war and one of the best hopes for a just and lasting peace.’ Then and now – even more so now and in the future – these concepts have been fully applicable, notwithstanding current hopes and notions about the end of the Cold War, the fading of military threat from the Soviet Russian empire, and secure, sovereign national freedom in Central Europe.”

Undeniably, the Captive Nations Week Proclamation belongs to the category of American documents that should be observed throughout the ages.

The 2021 proclamation can be found on the White House website: